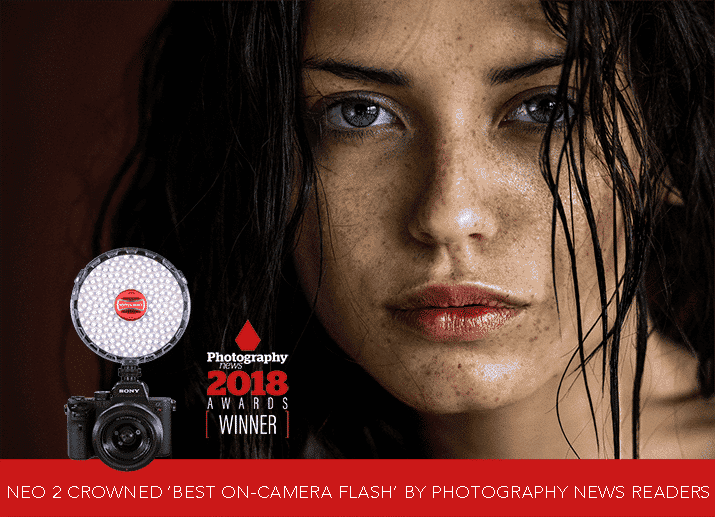 After a rigorous public poll which saw thousands of photographers of every skill level cast their vote, the NEO 2 has been named the Best On-Camera Flash of 2018 by Photography News; besting competitors such as the Profoto A1 and the Pixapro Li-ION580 MK II TTL. It’s an incredible feat to see an LED win best on-camera flash; demonstrating how LED lighting technology is not only becoming more accepted in the industry, but that it’s surpassing traditional strobe lighting both in functionality and the ways in which it enhances creatives’ workflows.

The NEO 2 is an industry-first revolution; the first ever on-camera bi-colour LED to offer both a continuous output and High Speed Sync flash all-in-one. The shoot what you see benefits of the 2000 lux continuous light means you can preview exactly where the light is going to fall before taking a shot. Ready to go in seconds, the NEO 2 eliminates the need for a trial and error approach to your lighting setup.

85% brighter than its predecessor, the NEO 2’s Flash mode offers up to 500% extra power. As the industry’s first LED to offer absolutely zero recycle time with no light loss, the NEO 2 is also perfect for shooting action at weddings.

Unlike other on-camera lights, the NEO 2’s dual functionality makes it ideal for photographers who find themselves increasingly being asked to shoot video. Photography News editor, Will Cheung, said in his review: “The NEO 2 is a clever innovation and a high-quality dual lighting source. It will suit photographers who shoot video and stills and want to travel with just one light source – it can be a continuous light one instant and a flash the next.”

Designed for creatives on the move, the NEO 2 is small light that delivers big results. Run on just six rechargeable NiMH or Li-Ion batteries, this powers the NEO 2 for 85,000 flashes or 1.5 hours with the modelling light on max brightness. The NEO 2 can also be run on mains power; providing extra versatility both on and off camera.

The NEO 2’s vast functionality includes numerous industry-first features which allow it to calculate your optimum aperture at a given distance using Rotolight’s True Aperture DimmingTM algorithm, or create spur of the moment lighting effects for videographers using CineSFXTM.

With a built-in Elinchrom Skyport receiver, the NEO 2 can be easily and reliably controlled by a Skyport transmitter, allowing for the seamless manipulation of up to ten lights in four groups from up to 200m (656ft) away.

The NEO 2 offers users tremendous value given its impressive feature set. Whilst offering a colour tuneable, flicker-free continuous light and HSS flash with a host of useful features like, CineSFXTM and True Aperture DimmingTM, the NEO 2 still represents a 65% cost saving on the Profoto A1 which it was pitted against.

Come and test our entire award-winning range at The Photography Show in Birmingham from 16th– 19th March and see how they can impact your workflow. We’ll be at stand B122 throughout the show hosting a number of talks from renowned photographers such as Jason Lanier and Terry Donnelly – you won’t want to miss it!