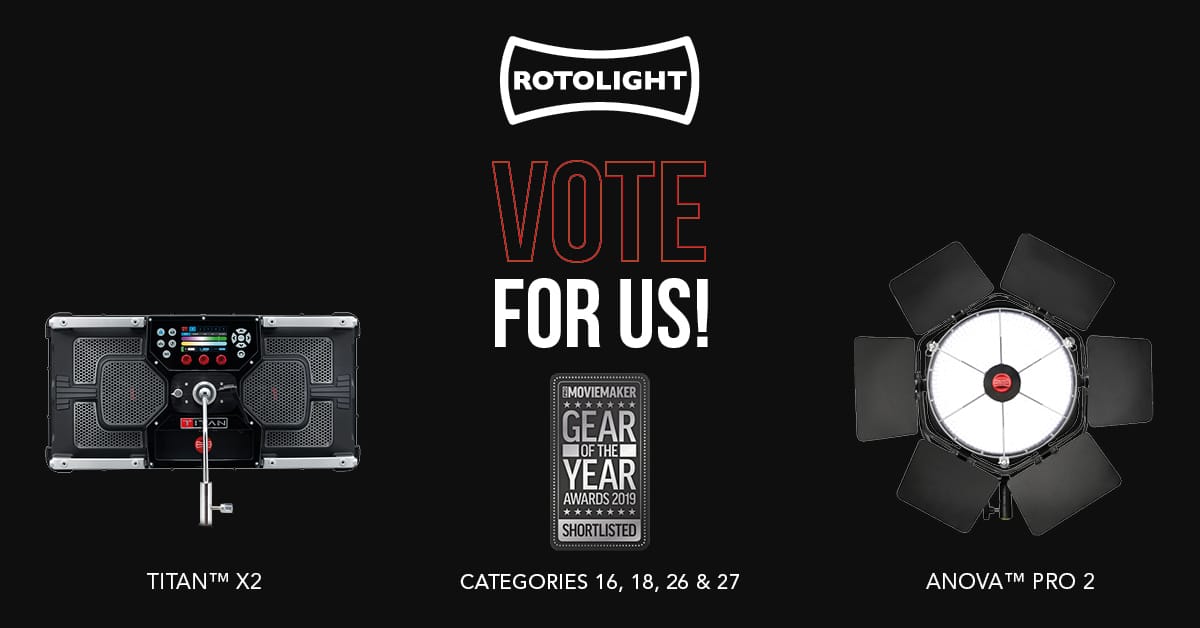 We’re delighted to announce that the new Rotolight Titan™ X2 and Anova PRO 2 have both been nominated for a total of four Gear of the Year awards from Pro Moviemaker!

Nominated for the Launch of the Year, Lighting Innovation and Innovation of the Year awards, the Rotolight Titan™ X2 is a ground-breaking 2 x 1 LED soft light, launched in September. The Titan™ X2 utilises state-of-the-art RGBWW technology to enhance users’ creative possibilities on set with a suite of industry-first features. Among these is the world’s first electronic diffusion technology, SmartSoft™, which allows for the adjustment of diffusion, focus and spread at a moment’s notice without the need for gels.

Designed to streamline the workflows of lighting professionals, the intuitive fast and responsive touchscreen means users can quickly and easily access key features without needing to navigate complex submenus.

Shortlisted for the third year running, the Anova PRO 2 was unveiled during a broadcast hosted by renowned Sky News presenter, Martin Stanford, at London’s first fully 4K TV studio, Celebro. Now as Celebro’s own light of choice in London and Washington, the Anova PRO 2 continues to illuminate some of the biggest names in broadcast. Also underpinning ITV’s Dancing on Ice’s dramatic new look for their 2018 comeback, the Anova PRO 2 lit the punchy, high-impact glamour shots.

“We used the Anova PRO 2s to create a number of effects, like firelight or paparazzi and quickly switch between them and the continuous light with just a flick of a button. That gave us the edge over other TV shows and provided the cherry on the cake for the glamour shots,” says DoP, Chris Yacoubian, who designed the set. “They were flashing and pulsing the whole time, yet hardly drawing any power.”

Both the Anova PRO 2 and Titan™ X2 allow for the adjustment of brightness and CCT in finite increments for precise control and provide High Speed Sync flash capabilities alongside the continuous output.

We’re overjoyed that we’ve also been nominated for a two  Gear of the Year awards from Photography News as well! The Anova PRO 2 and  Titan™ X2 have been nominated for Best LED Light, while the NEO 2 has been shortlisted for Best On-Camera Flash for the second year in a row. Vote for us over on questions 24 and 25!